“…One of the most difficult problems to diagnose is poor application performance – the applications are running slow or don’t respond. Traditionally, you start your diagnosis by collecting CPU, memory, disk input/output, and other metrics and then use tools like Windows Performance Analyzer to try to figure out what’s causing the problem. Unfortunately, in most situations this data doesn’t help you identify the root cause because resource consumption counters have frequent and large variations. This makes it hard to read the data and correlate it with the reported issue. To help you more quickly solve your app performance problems, we’ve added some new performance counters (available through the Windows Insider Program) that measure user input flows…”

“…The User Input Delay counter can help you quickly identify the root cause for bad end user RDP experiences. This counter measures how long any user input (such as mouse or keyboard usage) stays in the queue before it is picked up by a process, and the counter works in both local and remote sessions…”

“…The User Input Delay counter measures the max delta (within an interval of time) between the input being queued and when it’s picked up by the app in a traditional message loop, as shown in the following flow chart…”

“…The following graph shows readings for users working remotely in Microsoft Word. In this case, the RDSH server performance degrades over time as more users log in…” 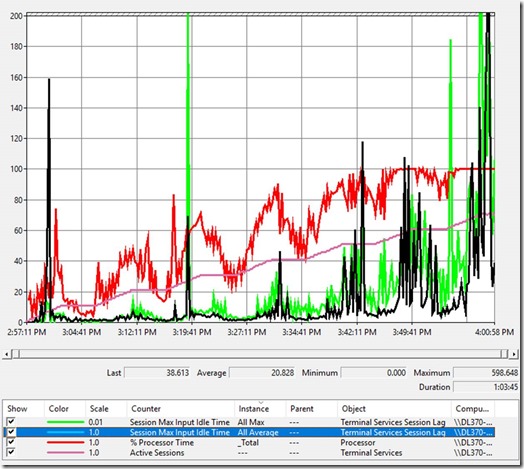 Here is a link to the RDS Team Blog announcement about this:
https://cloudblogs.microsoft.com/enterprisemobility/2018/04/25/new-performance-counters-diagnose-user-application-responsiveness-on-remote-desktop-session-hosts

Night at the Windows Store API Service: Secret of the Subscription Activation