Vesa Nopanenhttps://myteamsday.com/
MVP for Office Apps & Services (Teams & Collaboration focus), Principal Consultant in Office 365 and Modern Work. Extremely passionate about Microsoft Teams's power to change how people work together. Helping and coaching customers to find benefits, solutions and value when adopting new tools, methods, ways or working and practices into daily work-life equation. I am always eager to challenge current situation and dig out new possibilities and ways to think and work. You could describe me as a jack of all trades but my main focus area and deep personal driver is Microsoft Teams since it has changed the way I work and did a giant step forward to make it possible to work from anywhere - the location does not matter even us much as it mattered before. Microsoft Teams opened the path for many organizations to rethink their practices, worklife, culture and start the change. That's why I am very passionate about Teams.

It is time to take a look at the roadmap and what has been recently added to Microsoft Teams. When talking about the roadmap “predicted release” schedule it is good to keep in mind that the given month/time is subject to change. We have seen lots of changes recently (Feb-March) but as always: I rather take a working functionality later than a buggy version too early.

Live Transcription with speaker attribution has been launched.
“Live transcripts provide another way to follow along with what has been said and who said it. After a meeting, the transcript file is automatically saved in the chat tab for that meeting.”

25 person teams has also launched. “Support for up to 25,000 members per individual team.”

Windows native notifications in Teams has been in public preview but is now rolling out! You should see it in your tenants soon.

1000 person interactive meetings and Teams webinars are still being scheduled to April (-early May).
“Schedule and deliver 1,000 person webinars with the same Teams app you use for meetings! Webinar capabilities support registration page creation, email confirmation for registrants, host management for attendee video and audio, attendee reporting, plus interactive features like polls, chat and reactions.”

New manage tag experience and other enhancements is scheduled to April. This is a new addition to the list. Tags will be managed as a tab is a big change that will hopefully surface this great feature more to people.
“Tags in Teams let users quickly reach a group of people without having to @mention or type out everyone. Tags now can be managed as a Tab and you can receive notification for tag membership changes or search for tags in Teams. Tags will also now have a description field so that you can add more details to a tag.”

New PowerPoint Live Presentation option with desktop and window sharing can be expected in Mid-April – Mid-May. This has been called earlier Presenter Mode. When making a Live Presentation, presenters will soon be able to add a video feed to the presentation. This feature is available for presenters using the Microsoft Teams desktop app for both Windows and Mac.”
“When using the Teams Desktop app, the presenter will have a new option, Standout mode. When a presenter selects Standout mode, participants will see the presenter’s video feed superimposed onto the foreground of the content being shared. This mode appears to meeting participants who are using the Teams desktop or mobile app as well as Teams on the web. “

Separate Window Teams Live Events Producer Experience can be expected at May!
“With this new feature, you are now able to produce your Teams Live Events as a Producer in a separate window, allowing you to effectively manage your event.” 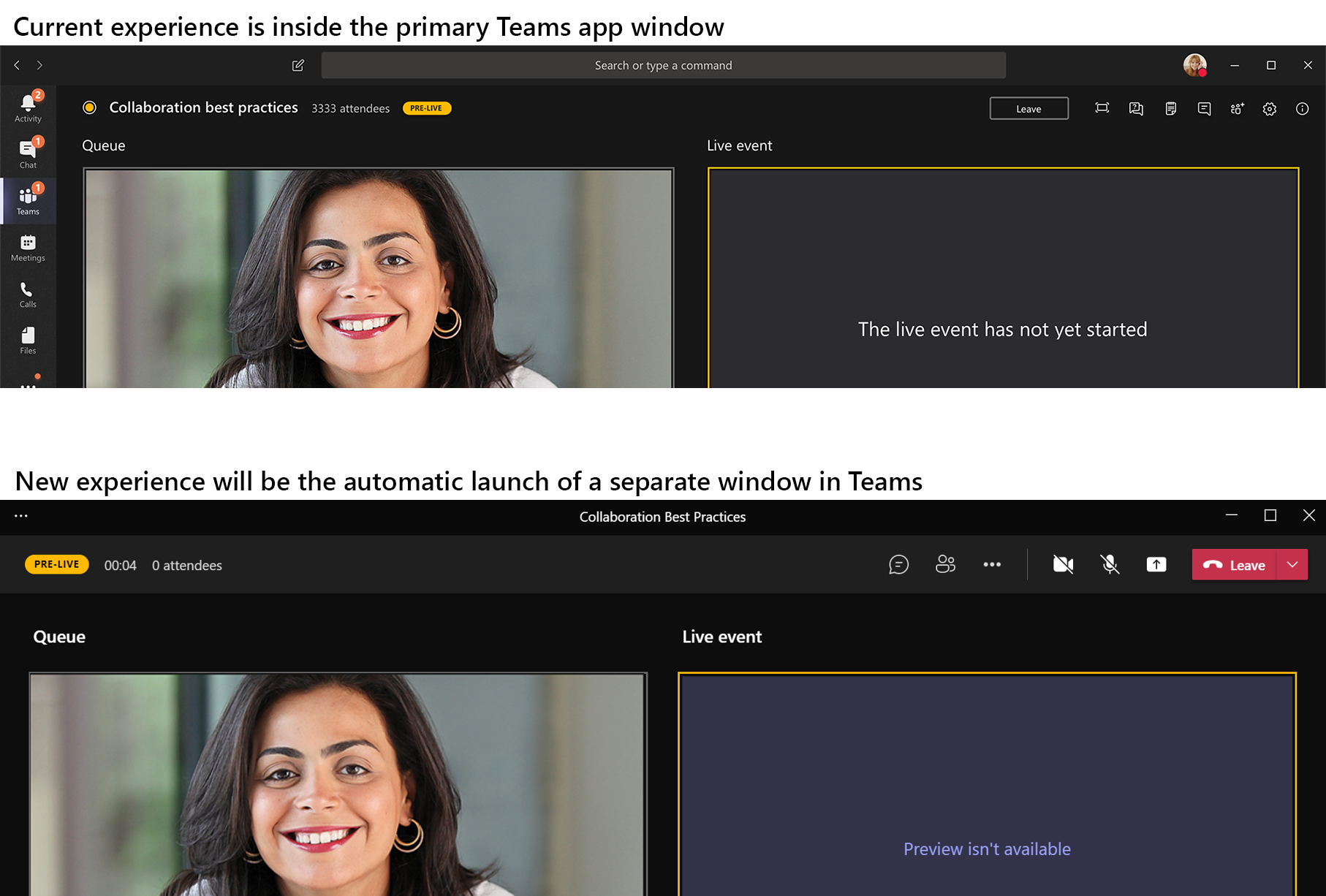 A couple of Forms polls features will be rolling during May:
Word Cloud for Polls in Teams: “When users have collected responses for an open text poll / question in a Teams meeting or in a regular form, word cloud data insight will be available to help them get a quick view on the top text phrases people answered.”
Data reports for polls after Teams meeting: “If user has used Forms poll in a Teams meeting, a summary report for all the polls used in this meeting will be generated and shared with meeting organizer and presenters.”

And then there is something I don’t agree with at all: Teams for your personal life banners. Teams will be starting “to inform users about the new productivity features and the ability to sign in with different accounts, we will show a banner in the activity feed for Teams mobile app users.”. When you are logged into Microsoft Teams with a business / enterprise account Teams should not start suggesting users to login with a personal account as well. This will confuse users. It is best for admins to submit a support ticket and request this feature to be turned off “To manage the visibility of the banners to your users, you can submit a help ticket in the Microsoft 365 admin center and your tenant will be excluded from the banners.”

The OOBE Massacre: The Beginning of Shift F10