Serverless is a hot topic in Cloud Development. Serverless cloud computing is all about scalability, performance, minimizing cost and maximizing business value by eliminating complexity. Its a true game changer but is it always the best approach for your software? In this blogpost I’ll address the pros and cons regarding Serverless API’s.

We’ve been building API’s for decades, with techniques like RCP, SOAP, Enterprise Service Buses, etc. The majority of the people nowadays build their API’s based on a REST or RESTful architecture. How does this trend match the new serverless hype that’s taking place? In this blogpost we are trying to find that out.

I’ll assume that you know what REST is but in case you don’t. It’s based on the following principles:

In order for an architecture to achieve those goals, REST has the following constraints:

More information about the constraints and principles can be found here

According to Martin Fowler’s blog this is the definition of Serverless:

Serverless can also mean applications where server-side logic is still written by the application developer, but, unlike traditional architectures, it’s run in stateless compute containers that are event-triggered, ephemeral (may only last for one invocation), and fully managed by a third party. One way to think of this is “Functions as a Service” or “FaaS”.

So the key takeaways are: event triggered, ephemeral and fully managed by a third party. So those Functions are serverside logic, triggered by events. In a REST based scenario that trigger might be an Http call, representing a REST operation. So far so good.

So, we might end up building Azure Functions for every REST operation. The client application then has to orchestrate the REST calls to the right functions. This might be done via naming conventions, a pattern which is common in REST based architectures. If you are questioning if this is really a good idea, hold that thought! I’ll come back to it.

Calling Azure Functions directly from your Client feels like a bad idea. Azure Functions should be those little snippets of code just executing at crazy scale and they should perform really well. On the other hand, we want to have an API with all kinds of additional features, we need those features to have an effective and future proof communication with our clients. I’m talking about: 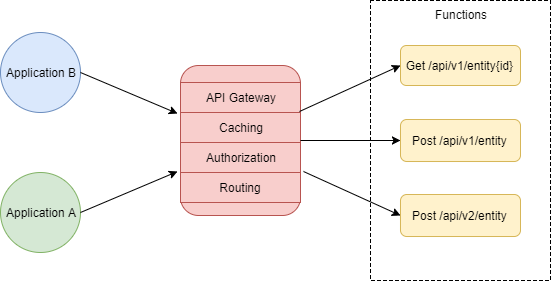 Azure offers a set of services which have the possibility to route traffic, cache and so on. However most of them are not a good fit to act as an API Gateway.

The following services are just for routing traffic on different levels but don’t implement documentation, logging, analytics, caching and so on:

The only service which is an actual API Gateway implementation is Azure API management. It includes caching, routing, security, documentation, logging and so on. It’s a comprehensive suite of features, and I’m planning to write a bunch of blog posts about it. So, stay tuned.

One thing to consider is the pricing of Azure API management. It’s quite expensive with a start rate of about 670 dollars. If you want to do Global API management or VNET integration you will have to pick the Premium tier, which comes at 2700 dollar a month. So the key take away is that if you want to build a REST API on Functions you might have to give in some features or pay a little extra.

A best practice is to share the API management instance across a company. In this way you can manage all outbound API’s from one service. Also you are managing all clients inside one service, offboarding clients is way easier this way. 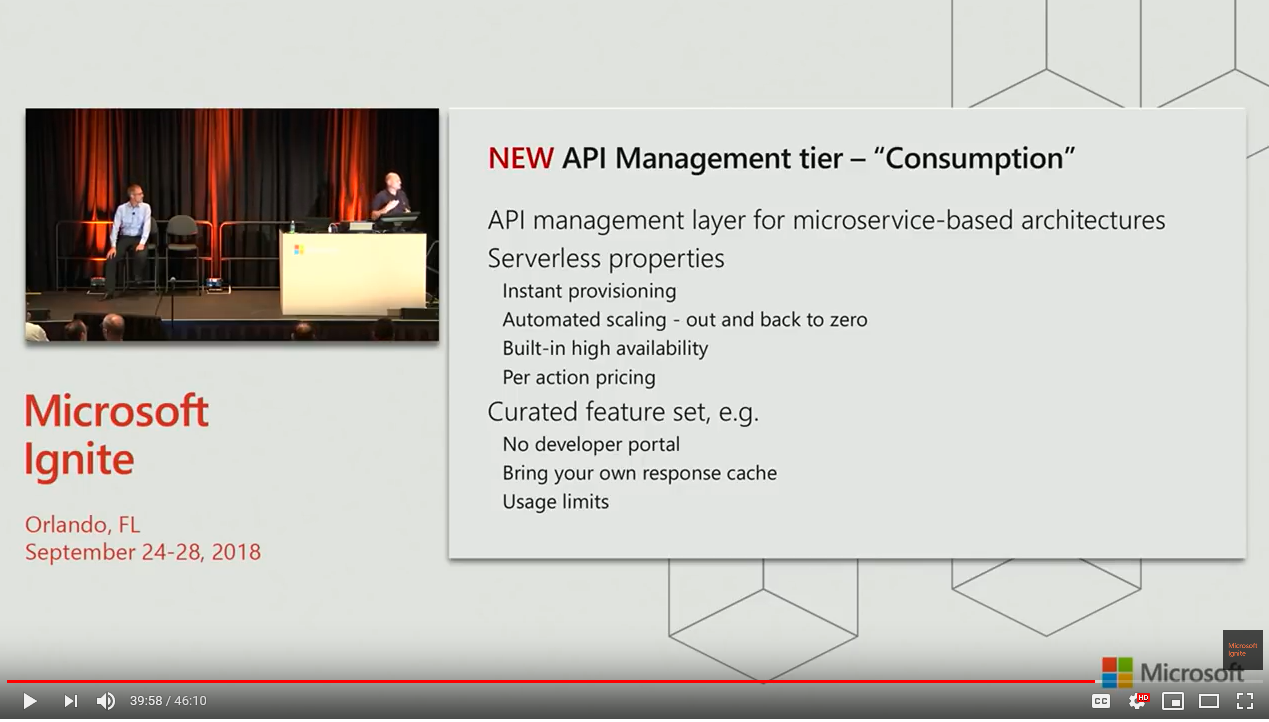 On Ignite 2018, Microsoft announced an API Management Consumption based tier. This tier should be optimized to handle Serverless scenarios. So basically Microsoft confirms the need for API Gateway when building Serverless architectures.

This consumption tier is now in private preview, hopefully it will be in public preview and later GA very soon. In the near future I will write some blog posts on:

Walking with the RD’s

4 Sessions not to miss on the Global AI Student Conference

Announcing #WPNinjasNL “Live – Ask us Anything” #4, on Tuesday...

4 Sessions not to miss on the Global AI Student Conference