I’ll break this down in the 3 parts, so it’s easier for you to navigate:

It was May 26th, 2019, and in Romania it was election day for the European Parliament. After 10 PM the results started to appear on the official government website, but they were stored in csv files. The process was like this:

This means that if you wanted to see the stats for the counted votes up to a certain time, you would have to download the CSV and sum up the columns for each candidate. Then you had to do this each time a polling station sent in their votes so you would have a live update of the results. Of course, I did this once, I did it again after 10 minutes… but then I said to myself “why the hell am I manually downloading a file when this could be done in a few lines of code?”. So I started working on this.

First, there was a console app. Each time I run it, the CSV is downloaded, the results are aggregated and displayed in descending order. Great, now I have this tool for myself, but there are 18 million voters out there who would be interested in the results as well as I am. So how could I share this with them in the easiest way possible?

In one of the talks I’ve given two years ago, I said that Azure Functions are great for prototyping. You could just create a function with the piece of code that you need and deploy it in Azure, so this is what I did. I took the code from my console app and put it in a function. Then, I just formatted the results as HTML and returned them from each HTTP call. Here’s how it worked:

This is actually the latest version. When I first deployed this I had only the HTTP function that would download the CSV file for every request. This is not a good idea when you have this many users, so I created another function that would download the file every 5 minutes and store the results in Azure Table Storage. Then, for each request I got from the users I would take the latest results from the table and sent them back as HTML.

I know, the code is ugly, the UI was ugly as well, but it got the job done and this is what mattered.

As soon as the function was live and functional, I posted the link on Facebook. The word got out and soon I was having users hitting the endpoint and seeing the results. After a while I got from a few users to a few thousand users per second, and this continued for about a day.

PS: In case you’re curious and you really want to see that page, the function is still up at this address, and this is what the project evolved into

I liked how easy it was to deploy my code from a console app in an Azure Function. I just created the function, modified the code so it will return an HTML file with the results, and then I used the Visual Studio option for publishing a project. From there you’re a few clicks away from seeing your function live. 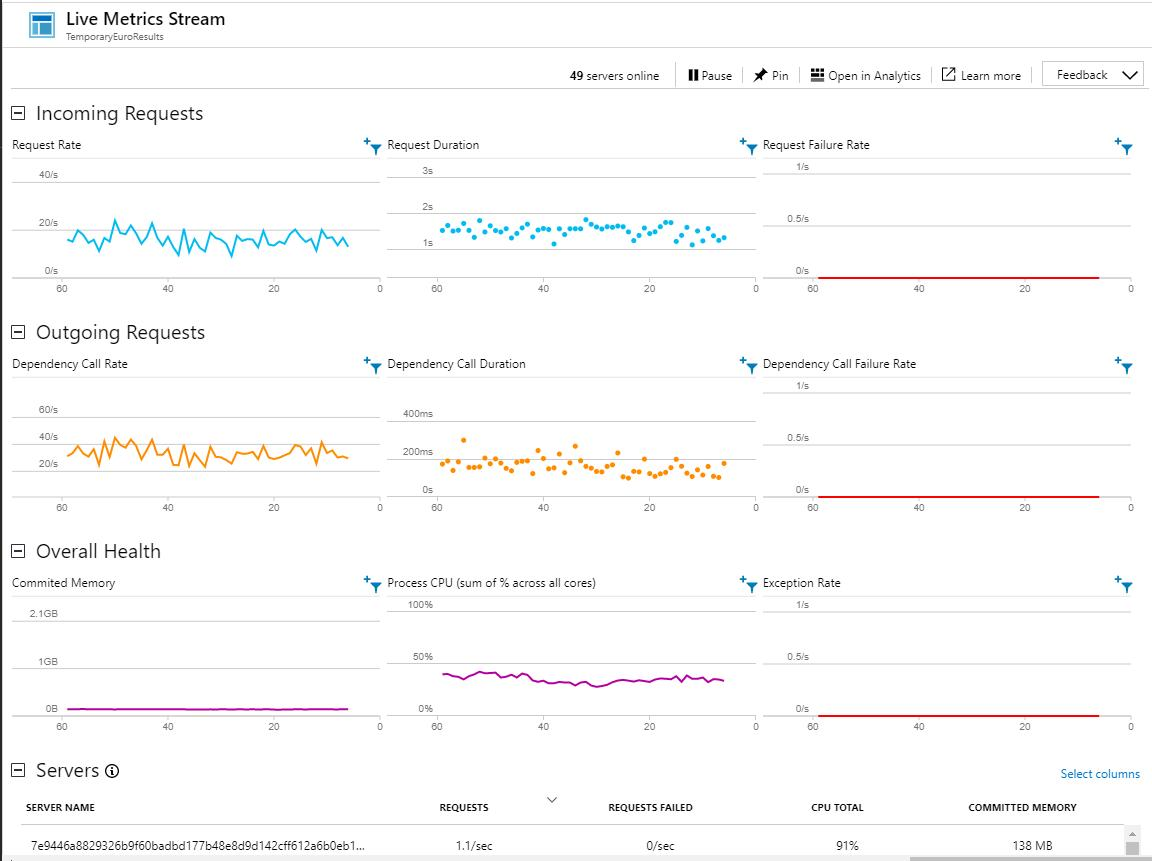 The function scaled pretty fast when people started to use it and I enjoyed the fact that I didn’t had to do anything special to make this work. This was just the built-in behavior and I just sat there and watched as it created more servers or killed them according to the number of users.

The function didn’t charge me anything because I was under 4 million executions, and back then this was the limit.

A few hours after users started pouring in, I did a deploy to change the name of a candidate. The deploy is usually very fast but now I had tens of thousands of users hitting F5 in their browsers at the same time, so Azure couldn’t create new servers that fast. It took ~10-15 minutes until the function managed to deploy enough servers (over 100 from what I remember) and I stopped seeing errors.

The function was free, but logging and storage are not. I enabled Application Insights to see more stats about the function and in a few days the cost was about ~40 $ for insights and ~10 $ for Azure Table Storage. So yes, the functions are cheap, even free, but additional services will incur costs and you have to pay attention if you need them. Microsoft is not actually selling Azure Functions, they’re selling additional services that go along with them, remember this 🙂

What would I change?

Well, I would be more careful on what services I decide to use with my functions. Application Insights provided a lot of metrics but it was too much for my needs, so if I had to cut costs, I would start with this. Also, I kept every snapshot of the results(meaning a csv file) in Azure Table Storage. It would’ve been easier to keep only the latest version, that would incur less costs.

Overall, I think this was a perfect scenario for using Azure Functions. I needed something fast, easy to deploy, and cheap. Azure Functions checked every item on the list and I would use this again if I had to.

This doesn’t mean you have to use Azure Functions everywhere you can, but only everywhere you think it’s a match. Sometimes developers have the tendency to use every new technology as a hammer and every requirement as a nail. Don’t be like that! There are alternatives to Azure Functions like scheduling libraries( I just wrote about Hangfire , Quartz.NET), or even hosted services from .NET Core. The last two I’ll cover in my next articles from this series, so if you want to get notified just subscribe to my newsfeed or follow me on Twitter

PS: If you want to see something cool done with Azure Functions, I would recommend the presentation below made by Sander Molenkamp at dotnetdays.

Configure your ASP.NET Core application to use HTTPS that runs as a container in a Kubernetes cluster

How I made my chair smart with 10$

Self Service in Microsoft 365

How to learn Azure

Self Service in Microsoft 365

How to learn Azure