The employee at the center of the universe

Rik de Koninghttps://www.about365.nl
My name is Rik de Koning and I work as a Functional Consultant for Portiva, which is one of the larger Office 365 implementation partners in The Netherlands. I started my career in 2011 as a SharePoint support engineer and in 2013, I went to become a SharePoint consultant where I did various projects on SharePoint Server 2010 and SharePoint Server 2013. In the last couple of years I started focusing more and more on Office 365, especially on SharePoint Online, PowerApps and Microsoft Flow. I like being challenged and for PowerApps and Flow being quite new, there are always some challenges when implementing these services. When I’m not working, I like spend some time with my family (girlfriend and son), hang out with friends, do some sports (like fitness, running, kitesurfing and snowboarding) playing videogames and just relax a little. If you have any questions, please do not hesitate to contact me!

Last month, I wrote about error handling in Power Automate and told you about the possibility of advanced error handling that I would be sharing later on.

In this blogpost, I will explain how to configure advanced error handling inside your flow.

In my previous post, I explained how you can catch errors using the Run after conditions and sending a basic email when your flow has errored.

When explaining the advanced error handling, I will build further on this Christmas presents budget flow we created earlier (as shown above).

For advanced error handling, we need to modify our previous flow a bit before we can deep dive into it. This is because this functionality only works on actions bundled into some sort of container like a Scope, Condition, Apply to Each or Do Until. In this example, I’ll use the Scope. 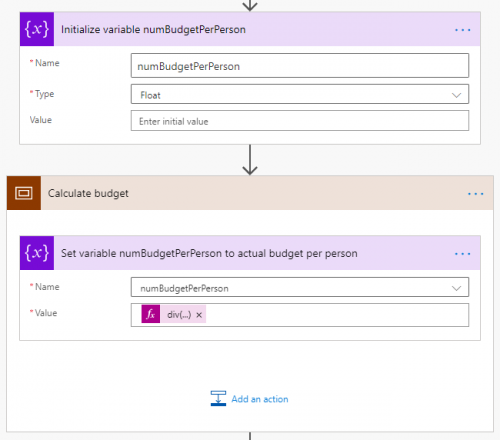 This Set variable action sets the value of the variable to the calculation we did in our previous post (which previously was being set in the Initialize variable numBudgetPerPerson action):

Where intTotalBudget is a static budget as set in the flow itself (in the Initialize variable intTotalBudget action) and number_1 is the amount of people input that will be asked when starting the flow.

In order to deep dive into the errors that may occur in your flow, we need to make use the of the result() expression. This expression is not listed beneath the Expressions tab, nor will it show up under IntelliSense:

So, you’ll need to build the expression for yourself. Luckily, it isn’t that hard. It is result(<name of your container>) where each space character is handled as an underscore character. In our example, we called our Scope container Calculate budget, so our expression should be:

When I put that expression in a Compose action and set the Run after condition of that action to run when the previous action (which is now our Scope container) has failed, you will see the outcome of this expression:

As you can see, the expression will show you the details of each action inside the container. In our example we only have one action defined, so we only see the details of that action. If you have more actions inside your Scope, your JSON will contain all of these actions (even if the actions succeeded).

Now what’s interesting about these details, is the bottom section. In here you’ll see that the action has failed due to a bad request. And not only that, even the full error message has been provided to us here (you cannot divide a value by zero).

Within this Apply to each action, we can put all error information together. But since the result() expression will loop through each action, all successful actions will be processed as well, so we need to exclude them.

We can do this by adding a Condition that will check if the status attribute of the outcome is equal to Failed. Since the result() expression is not available from the expressions tab, the attributes aren’t either, so we need to manually configure this expression as well:

When we put this into a Condition that will check if the value of the expression is equal to Failed, we now only get failed actions: 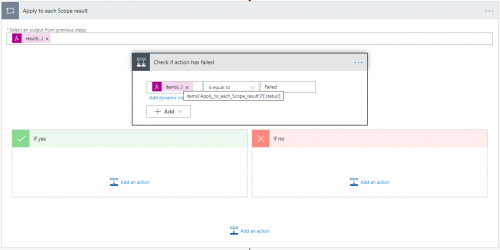 Now that we only process failed actions, we can proceed by collecting the information we want.

In this example, I want the name of the action and the actual error message. Because multiple errors may be possible (depending on the Run after condition set-up of your flow), I want each error message to be appended into a single variable so I can use that variable later on in an email.

Since the name attribute contains the name of the action, but with underscores instead of spaces, the replace() function takes care of translating the underscores back to spaces.

Formatting this a bit more friendly to the eye into HTML, your Append to string variable will look like this: 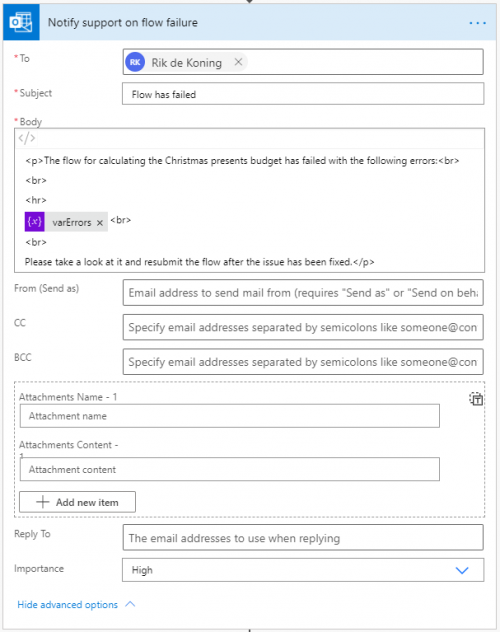 Make sure the email is not inside the Apply to each action, but directly beneath it.

When you run the flow without anything filled in for the Amount of people input, your flow will fail and you will receive the following email: 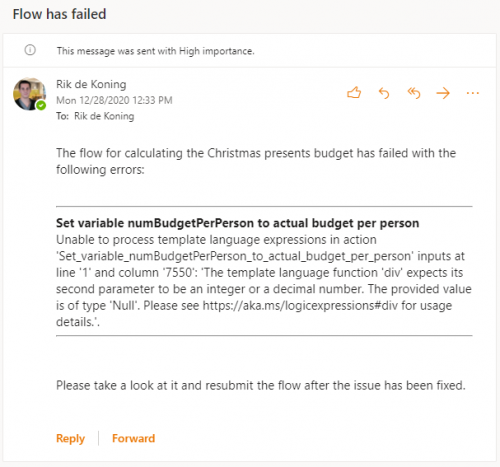 With everything in place, you now have configured a flow with advanced error handling. It should look like this: 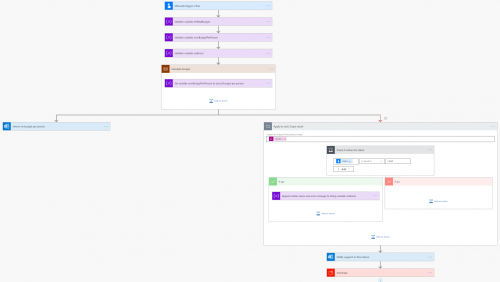 The employee at the center of the universe